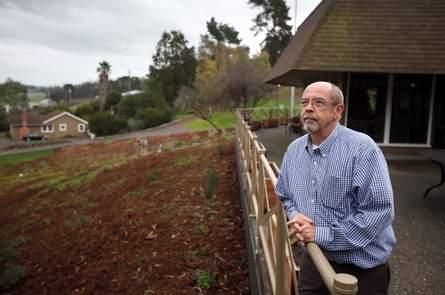 At Olympia House addiction recovery center, residents have to hike up a hill to care for the farm animals that are part of their healing plan. Sometimes they don’t feel like it.

But Dr. Wayne Thurston, founder of the newly opened West Sonoma County facility, puts it in perspective: “If your drug dealer was on top of that hill, you wouldn’t have trouble getting up there.”

Getting addicts “out of themselves” and out of their element in the rural setting is key, Thurston said.

For nearly four decades, the sprawling site off Valley Ford Road was owned by the Catholic Church, which oversaw the nonprofit St. Anthony Farm drug and alcohol rehabilitation center run by Alfred Boeddeker, a Franciscan monk.

Residents, mostly from the streets of San Francisco, worked on the farm, producing food for the church’s soup kitchen and dairy products that were sold to Clover Stornetta and others.

But in 2008, the Franciscan Order’s board of directors decided to shutter the Bloomfield farm in a cost-cutting move.

For years, Thurston, a Sebastopol resident and longtime Bay Area Psychologist, had driven past the site and dreamed of running a recovery center there.

Earlier this year, dairy farmers Kathy and Joe Tresch, who bought the 160 acres in January, got together with land broker T.J. Nelson, who with Thurston and a handful of other local investors created Sonoma Recovery Services to run Olympia House.

Along with the main building, where as many as 24 residents can be housed, a dwelling on the property will become a “sober living house,” a transitional residence for graduates of Olympia House before they head back out on their own.

Jimmy, 45, from Sonoma County, is the first graduate of Olympia House and will be the first resident of the sober living house.

An avalanche of troubles — alcohol addiction, unemployment, impending divorce — spurred him to seek out help this fall. On a referral, he called Thurston, who told him Olympia House wasn’t open yet.

“Something told me to keep trying,” said Jimmy, who asked to use only his first name for privacy. He called again a few days later and became Olympia House’s first resident.

“I found the right place,” he said this week. “There’s hope here.”

Since his graduation from his addiction program, Jimmy has taken two paying jobs at the site: 16 hours a week in housekeeping and 20 hours a week tending to the water buffalo.

“Part of my recovery is paying this place back,” he said. “I was the first one here, so I can be an example for the rest and help the new people.”

Thurston said he wanted to honor the farm work done by St. Anthony’s residents and has incorporated an agricultural focus into residents’ individualized treatment plans overseen by a clinical staff of five. Insurance pays for some of the $12,500 monthly shared-room costs, he said, and at least 10 percent of the residents will be treated for free.

Residents care for horses in an equine-assisted therapy program, feed and water — and milk — water buffalo and can hang out with a “therapy cow” named Bear.

At Olympia House, treatment plans are tailored to each person’s needs and motivations. Thurston’s motto is “whatever it takes” to help someone get well.

Yoga and qigong classes are offered to help connect mind and body.

“For some people, physical activity helps, particularly when they’re detoxing,” he said. “For others, it’s the total opposite — they’re just not physically capable.”

Finding the avenue that will keep a resident engaged in their own recover is crucial.

Alcoholics Anonymous and Narcotics Anonymous hold meetings there, as does Life Ring, the secular alternative. Psychotherapy and addiction counseling sessions are mandatory and a nurse is on staff to supervise medical needs.

But none of the other activities are required, Thurston said. Residents come to the facility on their own, not by court order.

“It’s all about choices,” he said. “Because that’s that they’re going to have when they leave here — choices.”

As a managing partner in the company, Nelson said it’s been rewarding to see early success and to see the site return to its roots.

“I’m sure if Boeddeker were here, he would be pleased it is up and running again,” he said. “The property has a great history.”